Hello all of my past devout readers! 🙂

It has been a  bit longer than I have expected and anticipated, but in the last few months I have felt the need to do some contemplation and re-evaluation with goals, direction, and my overall personal/spiritual growth.

As a result, I have taken a course by Doreen Virtue to become a Certified Angel Card Reader (r) .  I’m still reading Tarot, of course, but I feel that this course has helped me grow more in not only my spiritual and intuitive development but also provide greater dimension and understanding to my tarot readings that I couldn’t have before. I currently use a mixture of Angel Tarot and various Angel Oracle card decks.

I have recently posted on my new blog (which I ultimately intend to be more diversified), more reasons and explanation as to why I’ve changed my route which you are welcome to read here: My New Blog Post: Why I Changed from Tarot to Angel Card Readings  along with other posts that I’ve posted there and some others that we come soon.

I look forward to seeing you at my new blog! 🙂

If we have no peace…

If we have no peace, it is because we have forgotten that we belong to each other.
~ Mother Teresa

Looking for guidance?  Book a Tarot Reading today starting as low as $15!

When you hold your vision…

Want a message from your Divine Angels?  Get an Angel Card Reading for as low as $5!

What To Do When You Forsee a Future Event

Have you ever just had a sudden bad feeling about a friend as if knowing something bad was going to happen to them?  Only to later see that your vibe was exactly correct?

Have you ever randomly thought of a family member only to later realize something they are struggling through?

Have you ever had a dream of a friend or family member only to realize later that your dream was exactly right about what that person is dealing with in their life right now?

Whether we fully realize it or not, we’ve all had these experiences as some point or another.  Some of them may be in a little “flash” of a pre-cognitive dream while others we’ve been able to visualize this unfolding in our mind’s eye while awake.

For myself I must say that knowing how to deal with foreseeing these events have been a bit of an inner struggle.  Why on earth would I want to know that my friend’s book will not be successful? Or that my friend’s baby is going to die after delivery?  And it’s not only the mere act of knowing this information, but being aware of this information but feeling that there is nothing you can do to prevent it from happening.  In fact, even in these situations (unless it may be a positive future event) its not even something that you can or want to tell the person because:

1.  They’d likely struggle to believe you

2. They probably don’t want to hear it if you tell them without their own willingness to listen by asking for guidance.

3.  Many times, it’s not really your proper place to even try to intervene because it’s their lesson to learn on their journey and not yours.

So, what can you do?  Actually the better question is this: Why were you given this information?

The truth is that we should never repress and ignore this information — it IS valid because if it wasn’t important for you to know then your spirit guides and angels wouldn’t have provided you with this information.  They wouldn’t have given you the gift of this higher-level awareness.  Clearly it is still important.

Please note: In some cases the message is sent to you because you are supposed to intervene or warn someone about the situation.  However, if you are actually supposed to do this you will be provided with greater guidance as to how you should go about doing that.  If you don’t know how to go about doing that, then keep your lips sealed.

I’ll also note that there are some higher levels of awareness of information that can be sent to you at one point in time, but the steps on how to go about helping others with the idea may take time to unfold.  Be patient.  As you have more life experiences on your journey your guides will provide more pieces to the puzzle.  Know and trust that you’ll be given the information on how to create most effectively when the timing is truly right.

The Challenge of Trusting Your Own Intuition

Need guidance?  Book a Tarot Reading today starting at only $15! 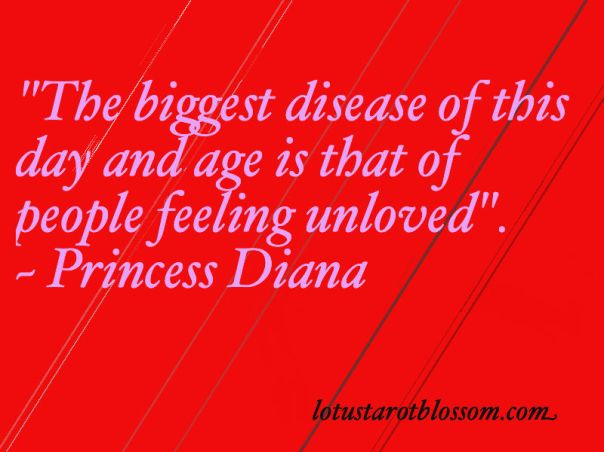 Tarot Card of the Month: September 2012

Looking for guidance?  Book a Tarot Reading today for as low as $15!

We need to find…

We need to find God, and he cannot be found in noise and restlessness. God is the friend of silence. See how nature – trees, flowers, grass- grows in silence; see the stars, the moon and the sun, how they move in silence… We need silence to be able to touch souls.

Need guidance?  Book a Tarot Reading today for as low as $15!

Want a message from your Divine Angels?  Book an Angel Card Reading today starting at only $5!

Why Tarot Reversals Need to be Read (or at least understood!)

Tarot Card Reversals — some long-time readers don’t believe in reading them while others abide by them to gain full understanding.  I’ve come across several who choose not to read reversals because they don’t want their readings to be “negative”. I’ve also seen some that don’t read reversals because someone told them that if they truly understood the cards they wouldn’t need to read the reversal.

For myself, I’ve always read reversals since Day 1 and I’ve never not overlooked the fact that a card came up reversed.  Through my experience, observation, and deep reflection over the cards over time, I do strongly believe that the reversed cards should be read — or at least the reversal meaning should be understood.

To highlight my point, I’m going to provide a short reading example.  Let’s say that I asked the cards the question: How can I increase my chances of a romantic relationship in the future?  The cards I deal are: Emperor Reversed, 9 of Cups, 5 of Cups Reversed.

The 9 of Cups often signifies “wishes fulfilled” and that there is potentially some satisfaction there.  However, the other two cards seem to not be quite as positive.

The 5 of Cups, when upright, shows emotional disappointment and loss.  Perhaps this person is still hurt from a past relationship, conflicts with a friendship, or problems in their family.  Regardless of the exact source, the person has likely dealt with some relationship problems and struggles to have this loss in their energy field.  However, since the card is reversed it is actually a hair bit positive (in the case with this card) because this card can signify depression.  As a reversal, that means that this energy is slightly “blocked” or “kinked”, which would mean for the 5 of Cups Reversed shows that the person is now at a moving on point from this disappointment even though the energy is still slightly present.  Is it significantly impacting them at this point?  No, but its not completely dormant either because if it was it wouldn’t come up in the cards.

The Emperor, when upright, expresses structure, discipline, boundaries, standards, organization, etc.  Since this card is reversed the energy is, as I said earlier, “blocked” or “kinked”.  This particular card, since it is one of the Major Arcana, is rather neutral and represents deep core lessons in the soul’s evolution.  There is a very significant lesson in this that could potentially really change the way person’s future is shaped.  So imagine to yourself what would  you  possibly see in a person who has the Emperor’s true energy “blocked”?  If a person has trouble with boundaries and standards what would you see?  That provides an answer to the reversal meaning.

In this case, I can see two potential interpretations for the Emperor Reversed:

1.  The person has “too strict” of standards that they don’t allow anyone in because they fear to be “dominated” as they may have in the past.

2.  The person should remember to have standards and not just settle with anyone.

Though these interpretations both appear to be at opposite ends of the spectrum, the irony is that they can both very well be true and resonate with the client.  Why?  Because at both ends of the spectrum there isn’t an equal balance.  To set standards and boundaries we have to have them, but not make them too strict.  An equilibrium has to be developed between the two, and it is then and only then that the true Emperor energy can be properly utilized.

If we did not read or consider the reversal then we may have easily looked this aspect over completely.  Yes we may have picked up on a need for “structure” but we would’ve missed in understand where the client fully is if we didn’t ask ourselves “If this energy is blocked, what would it look like?”  By reading and striving to understand the different potential interpretations of the reversal, we are then able to ultimately understand the full depth of the cards themselves better rather than simply look at them at face value.  It’s a complicated universe with many different variables — it’s a shame if we overlook these little things and miss them entirely, especially in this type of work.

The Challenge of Trusting Your Own Intuition

Reading the 7 of Cups: The Good and the Bad

Looking for guidance?  Book a Tarot Reading today for as low as $15!